The Seattle Great Wheel opened in 2012, and is already a local landmark. Located on the very end of touristy Pier 57, the Great Wheel soars 175 feet over Elliott Bay and is the largest observation wheel on the West Coast. The wheel is equipped with 41 climate-controlled gondolas that can hold eight people. One VIP gondola, which has leather chairs, additional perks and a glass bottom, is available for an extra fee. The ride is slow and smooth, gliding through three full rotations in 15 to 20 minutes depending on crowd size. Many of the sights you’ll see from the wheel are Pacific Northwest highlights, worth spending a day or two exploring before, during or after our Seattle culinary tour or on a trip of your own. 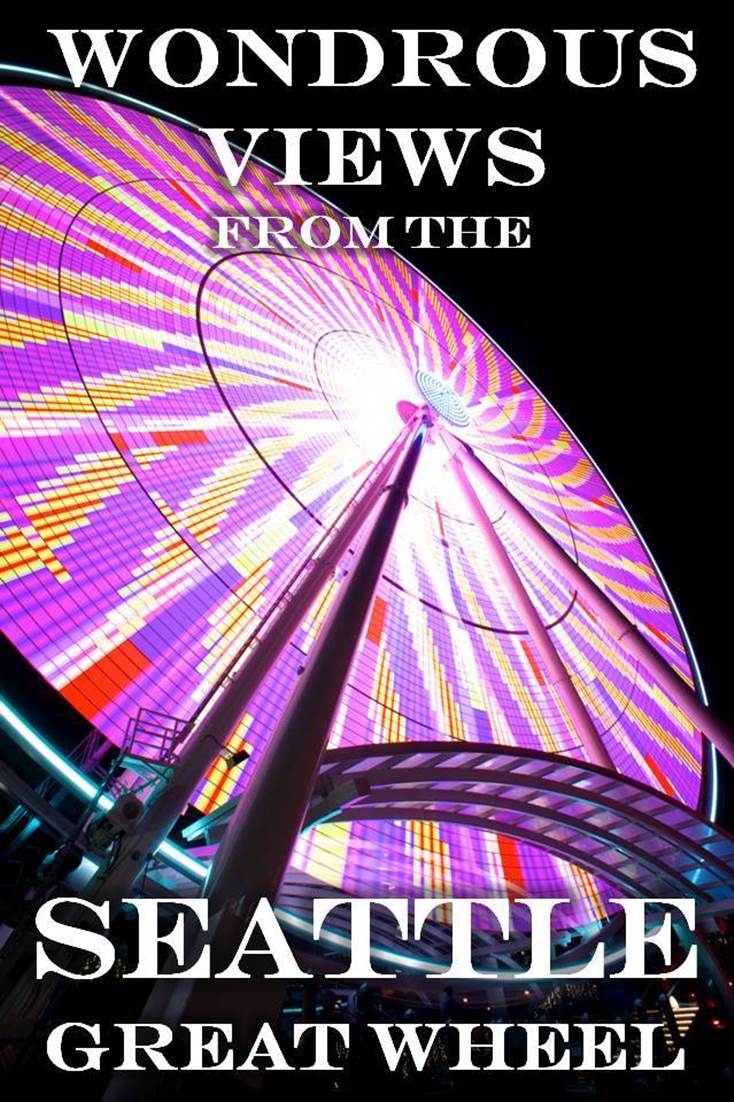 The Great Wheel is equipped with LED lights that stay white most nights, but become a swirl of color on special occasions. If you’re in Seattle for a major holiday, or any University of Washington or Seahawks home football games, watch for a dazzling light show on the Great Wheel.

The Great Wheel is close enough to downtown that you’ll see plenty of city sights from its heights, but high up enough to provide the scope necessary for excellent views of the Puget Sound and mountains in the distance. From striking downtown architecture to breathtaking natural beauty, the Great Wheel offers panoramic vistas that delight locals and visitors. Hop into a quiet, comfortable and cozy gondola, allowing yourself to be suspended over the pier and water below. Each gondola has two sets of benches, one faces downtown, the other faces out over the water. Both directions have stunning views and there is plenty of time on your ride to see everything.

If you’re facing downtown, the area’s many skyscrapers house luxury condos and corporate offices. Tucked into this dynamic yet laid-back area is Pike Place Market, known for flying fish, fresh produce and the first Starbucks. 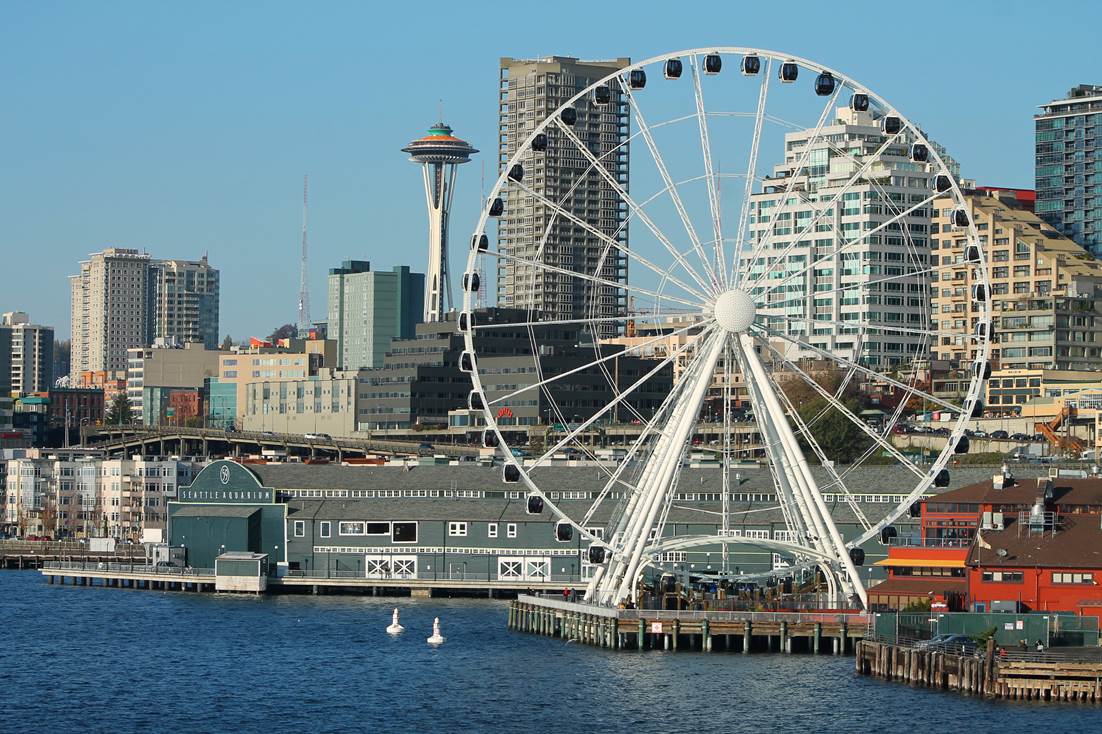 Look a little to the north and you’ll see the Space Needle peeking through downtown’s skyscrapers. Built for the 1962 World’s Fair, the Space Needle is 605 feet tall with a 360-degree observation deck at 520 feet. The Space Needle is part of the Seattle Center – home of the Experience Music Project (EMP) Museum and Chihuly Garden and Glass.

Not far from the Great Wheel, on Pier 59, is the Seattle Aquarium. Focusing on Pacific Northwest marine life and conservation programs, the aquarium has been open since 1977. Between the wheel and the aquarium lies Waterfront Park, a peaceful boardwalk to stroll and people watch.

Several piers are south of the Great Wheel. Elliott’s Oyster House, a mainstay in the Seattle seafood scene, is on Pier 56. Ivar’s, famous for their clam chowder, has been in operation on Pier 54 since the restaurant was founded in the 1940s. A little farther south is Colman Dock, where ferries to Bainbridge Island and the city of Bremerton transport daily commuters. The sight of many cranes marks Seattle’s industrial area, reminding you that this is a busy port city, connecting the Pacific Northwest to the world. 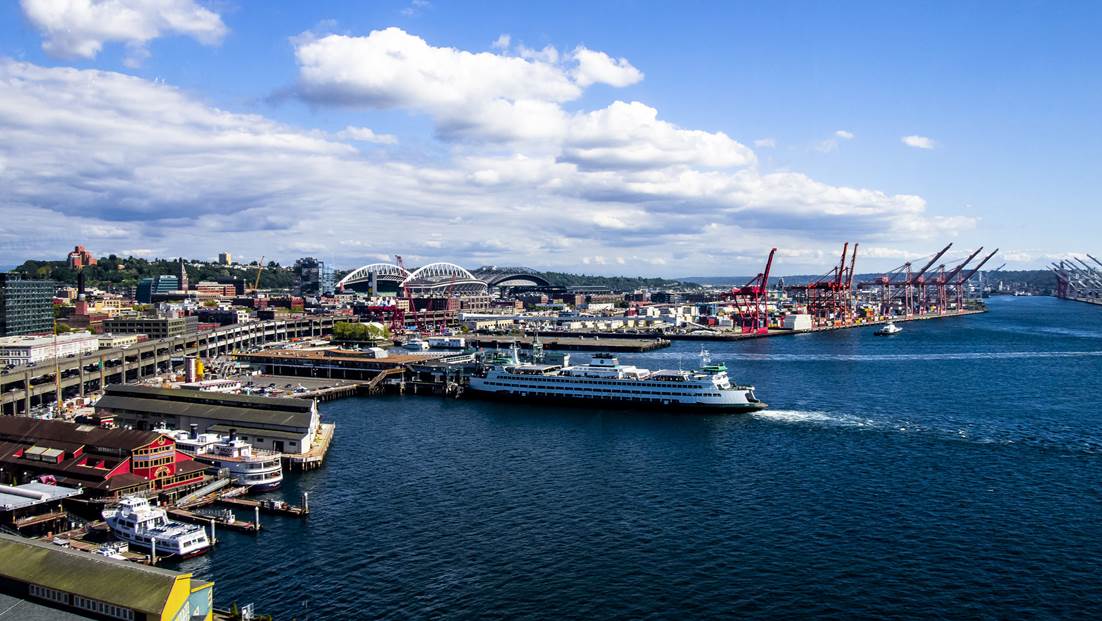 Recognizable by their enormous arched roofs, CenturyLink and Safeco fields are just south of downtown and you’ll see them from the Great Wheel. The Seattle Mariners baseball team plays at Safeco Field, where the stadium’s retractable roof allows fans to enjoy a game no matter the weather. CenturyLink Field has been home to the Seattle Seahawks since its completion in 2002. With a capacity for 72,000 people, the stadium is also the home of The 12th Man, the football team’s avid fans.

Floating above Seattle is gorgeous Mt. Rainier, its white snow crisp against the blue sky. Mt. Rainier National Park, a two-hour drive away, is perfect for all kinds of hikes, whether you want a short walk to see wildflowers or a multiday glacier climbing adventure. The highest mountain in the Cascades (14,411 ft.), Mt. Rainier is an active, but currently sleeping volcano.

If you take a seat in the gondola facing the water, you’ll have views across Elliott Bay. Elliott Bay is the name for this portion of the Puget Sound, the large inlet of the Pacific Ocean which gives the state of Washington its unique shape. Ferries, sailboats and commercial ships regularly dot the bay with color and activity. 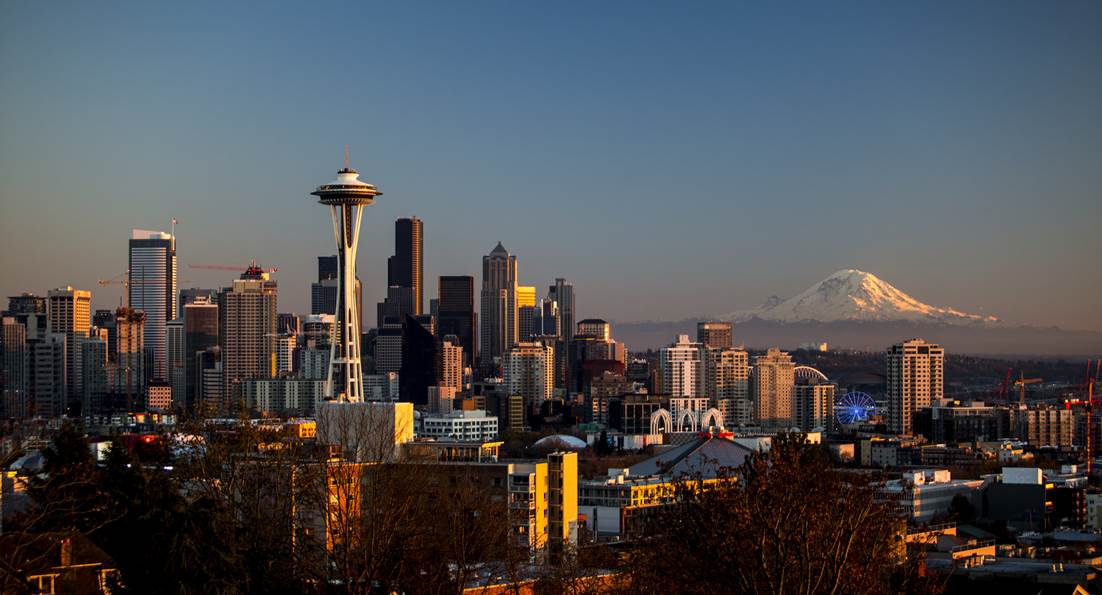 Bainbridge Island lies across the bay, nearly due west from the Great Wheel. Despite its proximity to Seattle, Bainbridge feels far removed. Part fishing village and part artisan wine and food haven, the island offers many parks and tranquil waterfront walking trails.

On an especially clear day, the Olympic Mountains are visible far in the distance. Dominating Washington’s Olympic Peninsula, these jagged peaks are covered in temperate rain forests. This lush peninsula is full of wildlife ranging from tide pools full of anemones to fields that conceal deer and black bears.

As your ride on the Seattle Great Wheel comes to an end, you’ll feel dazzled by all the beauty and excitement the Seattle area invites you to experience.

Ireland! Join Us on the Emerald Isle!
Next Post: Interesting Facts about Jaipur, India