Who are the Maasai?

The Maasai, a proud people, are struggling against the forces of the modern world to maintain their historic traditions and nomadic way of life.

WanderTours > Blog > Blog > Who are the Maasai? 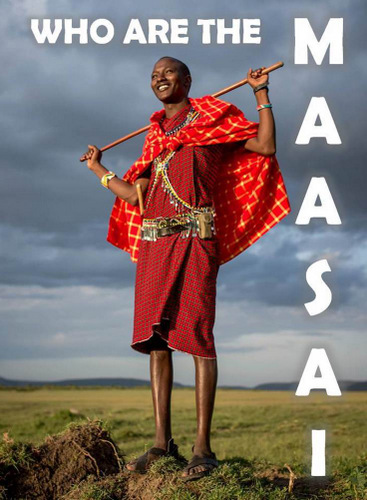 Yep, you’re reading that correctly…the word is spelled Maasai, NOT Masai. The second spelling is that of the British settlers and is still used to this day, but if you want to call the tribe by the name they call themselves—change up that spelling. The word Maasai means “people speaking maa,” and refers to a tribe that lives amidst the Great Rift Valley and game reserves of East Africa.

We’ve all seen the pictures…they stand tall and proud in their distinctive bright red robes, which set them apart from other local tribes. They’re renowned for their courage (at one time, a young boy could only achieve warrior status by killing a lion single-handedly with his spear) and are one of the few tribes that have retained their ancient traditions, lifestyle and folklore. As is so often the case in Africa and other developing nations, their way of life is becoming more and more difficult to sustain. 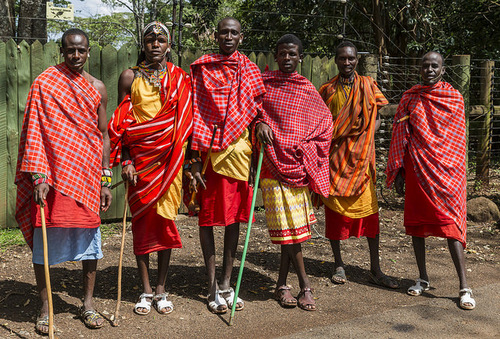 At the beginning of the 20th century, the Maasai were the dominant tribe in southern Kenya and northern Tanzania. However, with the arrival of the British, they quickly began losing their territories, eventually signing treaties that signed away their most fertile lands.

The Maasai have always been a semi-nomadic people, reliant on grazing their livestock side-by-side with the native wildlife. They are unfortunately becoming a marginalized people, affected by drought, loss of their grazing lands and the expansion of the ecotourism industry. While ecotourism may seem a positive step to outsiders, the creation of more parks and reserves is being enacted without any input from the indigenous people. As they lose more and more of their land, they have begun fighting for their land rights. They feel that the land is their ancient heritage to share with the wildlife and it shouldn’t be all about developers chasing the eternal dollar. 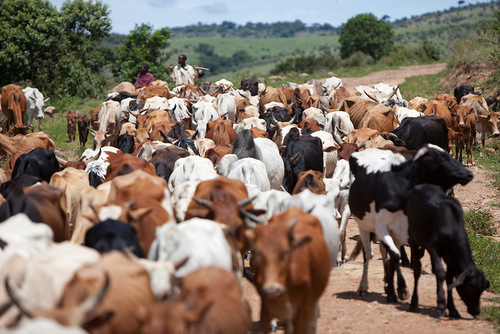 The Maasai tend to live in clusters of huts—called a kraal—surrounded by a fence made of acacia thorns to keep out lions. Their homes are generally small and dark, with dirt floors and no windows, running water or electricity. 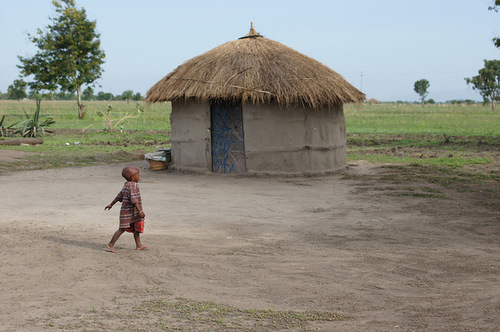 Cattle play an important role in the Maasai culture and and a man’s wealth is measured by the number of cattle in his herd. Milk—drunk raw, in tea or served as butter—is a part of almost every meal. While beef is also an important component of their diet, it cannot be consumed at the same time as milk.

Perhaps the most startling aspect of the Maasai diet is the consumption of cattle blood—drunk raw or cooked or in a milk/blood mixture. As the size of herds diminish, however, the tradition of drinking blood is gradually disappearing and more often occurs only during certain rituals rather than as a part of everyday life. And, as more Maasai turn from herding livestock to agriculture, it is becoming more common to see them eating maize (corn), rice, potatoes and cabbage. Many Maasai still believe that tilling the land is a crime against nature, as once it’s tilled, the land is no longer good for grazing.

Music and dance—often containing an element of flirtation—are an important element in most Maasai celebrations. Eunoto, or the coming of age ceremony, can sometimes consist of up to 10 days of dancing and singing. Adumu, or “the jumping dance,” as westerners call it, is perhaps the most recognizable image of the Maasai. During this dance, the warriors form a semi-circle, with one or two of the young men in the center. As the chanting and clapping of the surrounding warriors becomes more rapid and insistent, the men are urged to jump higher and higher. 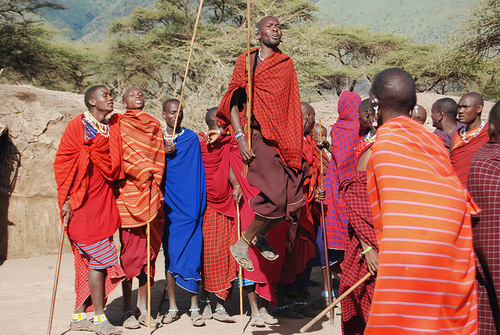 Maasai beauty tips differ slightly from those of most western cultures. It’s not unusual to see hair smeared red with ochre, ears that are pierced and earlobes that stretch down to their shoulders. Instruments used for piercing can include thorns, twigs, a hot iron or a piece of elephant tusk. After the piercing of the upper ear, a hole is cut in the lobe. This hole is gradually enlarged by inserting ever larger rolls of leaves or balls of mud into it. The larger the hole the better! Speaking as a mother of a daughter who has plugs in her earlobes, I’m not really too shocked by this image!

While the Maasai people are definitely facing many challenges, many are doing their best to continue their traditions and way of life. I only know that I feel grateful that I’m going on Tanzania on our safari and I look forward to gaining a better understanding of the challenges they face.

Note: Due to a cancellation on our January safari, we now have one spot available. Contact us if you’d like to join us on this adventure.

The Castles in Ireland with the Most Interesting Histories
Next Post: Where to Watch Seattle’s Colorful Sunsets