Who Are the Coast Salish People

WanderTours > Blog > Blog > Who Are the Coast Salish People

The Coast Salish people consist of the dozens of indigenous tribes who have lived for thousands of years along the coast of the Canadian province of British Columbia, as well as the U.S. states of Washington and Oregon. The earliest evidence of their culture dates back to 3,000 BC, although legend places them here thousands of years before that! Although the culture and language of each tribe do differ, they are all related to each other both ethnically and linguistically.

The people of these tribes lived off the plentiful bounty of both the land and the sea. Abundant salmon and shellfish were the mainstay of their diets along with deer, elk, moose and bear. They also foraged for medicinal greens, nuts and berries. Attend any native potlatch—a gift-giving feast—and you will likely be served salmon as the main dish. 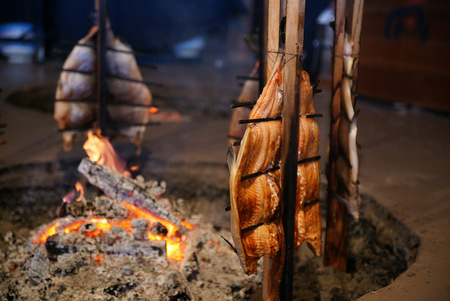 Families, or groups of families, lived in longhouses, sleeping on platforms around the outer edges of the building. Fire pits were located in the middle of the house with a slatted ceiling acting as a chimney. Most Coast Salish villages were built at the mouths of rivers or in sheltered bays where they were protected from the winter storms. These tribes did not have one single chief. Instead, the senior men of each family conferred over any tribal issues. The Coast Salish were not war-mongers and most warfare occurred only as a defensive measure. There was much inter-marriage between tribes.

The indigenous culture is interwoven throughout the history of the Pacific Northwest. Some of the most obvious remaining examples of the culture are the totem poles found throughout the area. These towering sculptures display beings or family crest animals that distinguish each family’s lineage.

While the poles don’t necessarily tell a story, they document stories important to a particular family or group. There are many different types of poles serving many varied purposes. Two such examples are the house frontal pole, which stands at the front door of a longhouse, and the mortuary pole, which contains the ashes of the deceased and serves as a tomb and a headstone.

Salish art often portrays images of nature with animal forms appearing on their own or combined with human forms. There are also many geometric shapes and repeating patterns found throughout their art.

Local wild animals are worshiped as spirits, with each animal symbolizing a specific trait. The bear symbolizes family and strength while the eagle is sacred, wise and noble, representing power and prestige. I wear a carved silver ring with a raven—who happens to be the trickster or catalyst for change—because the raven happens to be my Scottish clan’s symbol and I’ve decided to follow in the footsteps of our local indigenous people. 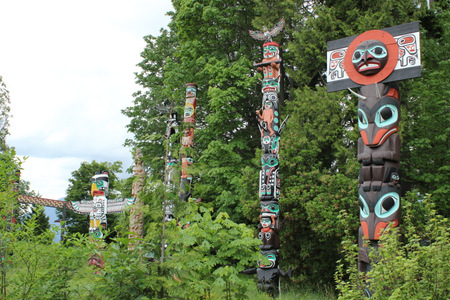 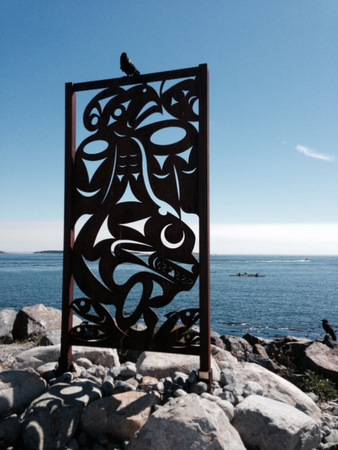 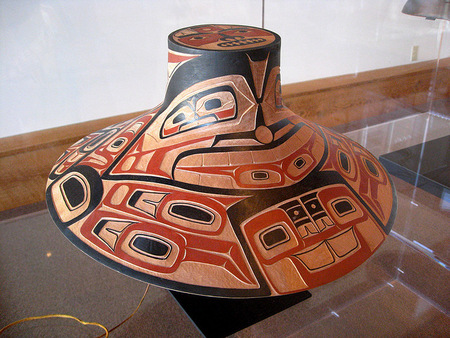 Ceremonies include elaborate costumes and haunting music which is highlighted by the steady thump of ceremonial drums. 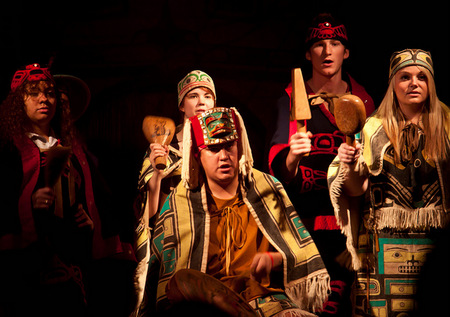 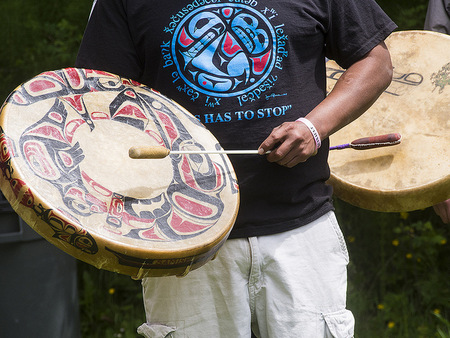 Join us on our Seattle Culinary Tour where we’ll visit Tillicum Village—the birthplace of Chief Seattle. Here, you’ll enjoy a traditional salmon bake in the longhouse and watch a stage performance including Coast Salish story telling and live, traditional North American dance. Contact us or phone us at 206-317-1860.