I always think of Bali as a hugely popular tourist destination (which it is) and as the place that my sister went on her honeymoon. But there is so much more to it than beautiful beaches, emerald-green rice terraces and delicious food.

I always think of Bali as a hugely popular tourist destination (which it is) and as the place that my sister went on her honeymoon. But there is so much more to it than beautiful beaches, emerald-green rice terraces and delicious food. It’s a deeply spiritual country—as anyone who has read or watched Eat, Pray, Love can attest to. 🙂 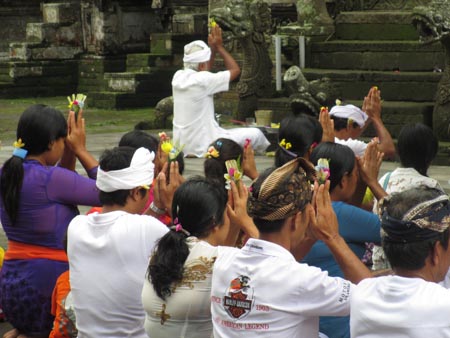 While most of Indonesia practices Islam, almost 85% of the population of Bali adheres to Balinese Hinduism. This religion, also called Agama Hindu Dharma, originated in Java and is a combination of Buddhism and Shivaism (one of four widely-followed sects of Hinduism).

Indigenous beliefs—such as animism, where it is believed that each element of nature possesses a spiritual essence, and ancestor worship, where the belief is that the dead continue to exist and may have the ability to influence the fortune of the living—also play important roles in the Balinese belief system. Spirits and ancestors are treated with great respect and are housed in shrines, where daily offerings are made. 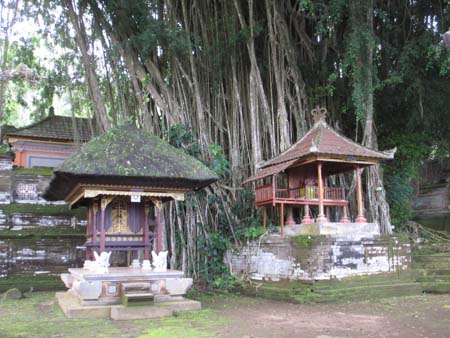 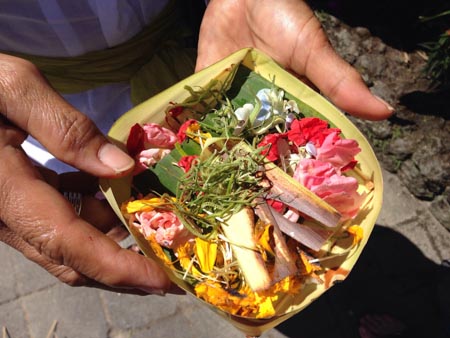 Funerals are very important ceremonies and are centered around the cremation of one’s body. This is seen as returning the body to its original residence, the macrocosm of the universe. Since this can only be attained through fire and water, the ashes are then spread on the sea or nearby river. According to Hindu beliefs, after death, a soul passes into another body. While in a body, the soul is in torment and is thus always seeking to free itself from incarnation by achieving enlightenment.

The Balinese believe that the mountains are home to the gods, deified ancestors and souls that have not achieved enlightenment. The gods and deified ancestors occasionally descend to earth during temple ceremonies and partake of the offerings and enjoy the entertainment. When the unenlightened souls are ready to reincarnate, they also descend from the mountains looking for a body to inhabit.

Balinese dance is strongly entwined with religious beliefs and offerings of flowers and foods must be made to the gods before any dance, even those which are simply for the entertainment of tourists. 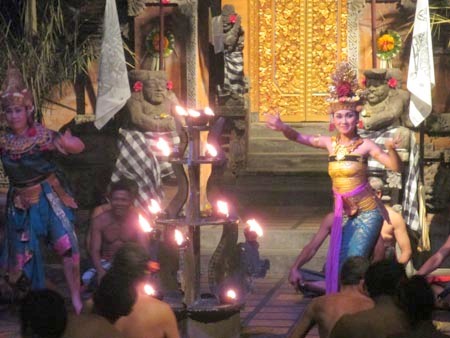 You can’t miss the temples…they’re everywhere…even in the middle of rice fields! 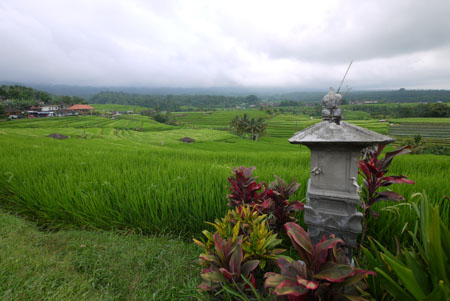 Balinese beliefs are hugely complex and I’ve only touched on some of the highlights. You’ll just have to visit yourself if you would like to learn more. While our 2015 Bali and Java Women-Only Tour is sold out, contact us if you’d like to be on a list for a future tour to this amazing destination.

All other photos – Beth Whitman