The Basics of Indian Cuisine

Indian cuisine is a result of 5,000 years of history and the influences of dozens of outside influences. Here are a few basic tips on what to expect when dining on the sub-continent.

The cuisine of India is a result of 5,000 years of history, of interaction between the sub-continent and multiple other outside influences, such as the Mughals, British and Portuguese. Travel the country and you’ll find that each region has their own cuisine – each with its own specialties – based on locally available spices, vegetables, grains and fruits. With the advent of Buddhism, vegetarianism now plays a large role throughout the country and, because cows are sacred to the Hindu religion, the consumption of beef is rare. 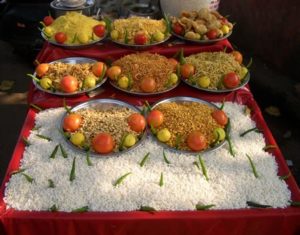 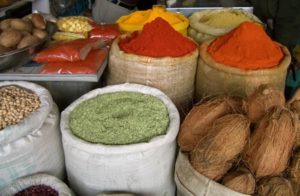 Most of us, when we cook an Indian meal, go to the market and buy curry powder. Did you know that curry powder isn’t one spice but is actually a mix of spices? The specific ingredients vary depending on where in India you are. Typical spices found in curry powder include: turmeric, coriander, cumin, fenugreek and chili peppers. In North India, you’ll find a similar spice combination, garam masala.

The chili pepper was also introduced by the Portuguese and often appears in dishes, either whole or ground. Cardamom, also used in many dishes, is the third most expensive spice in the world (after saffron and vanilla) and is grown in India. Other spices frequently used include black mustard seed, ginger, cinnamon, coriander and garlic. 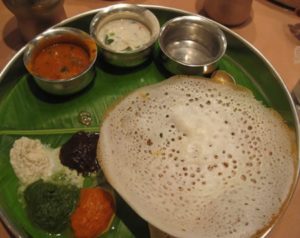 Breads in India tend to be flatbreads, made from flour and water and rely on yeast spores from the air for fermentation. Chapati, roti, paratha, naan and dosa are just a few of the many types of Indian breads. Breads can be served plain or may come stuffed with potatoes, vegetables or paneer (cheese).

Mouth watering yet? You still have the opportunity to join our North India Culinary tour this fall and experience these complex and diverse tastes for yourself! Call us at (206-317-1860) or Contact Us via email.

Is Travel Insurance Worth It?
Next Post: Elephant Nature Park in Thailand