The Art of Crossing the Street in Vietnam

Traffic in a southeast Asian country such as Vietnam is unlike anything most of us have ever experienced, and you need to learn how to cross the street.

WanderTours > Blog > Blog > The Art of Crossing the Street in Vietnam

“Stop. Look both ways. Are there any cars coming? No? OK, we can cross the street.”

My four-year-old grandson is learning street safety and this is a common refrain every time we go out. There’s an art to crossing the street, wherever you live, and it’s something that is drilled into us from a very early age. For those of us living in North America, pedestrians have the right of way over the automobile…but that’s not the case in many other countries.

Most Westerners have never experienced anything like traffic in a Southeast Asian country such as Vietnam, and you need to learn how to cross the street so that you emerge on the other side unscathed. (This is a real thing. There are actually videos online that show you the correct way to cross the street!)

If you’re planning a trip in the near future—maybe you’re booked on our Vietnam Tour—you need to forget everything you’ve ever known about crossing the street. Dive headfirst into the challenge of conquering the traffic of a busy street in Hanoi or Saigon. It may be daunting, but the results are exhilarating (especially when you can finally get to that tasty street food cart on the other side of the street). 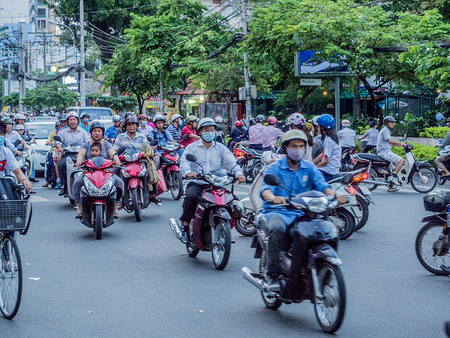 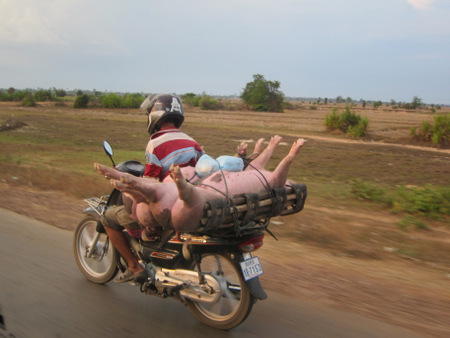 The first thing you’ll notice is that while there are many cars in the major cities, much of the traffic is comprised of motorbikes and bicycles rather than cars, as a car is beyond the reach of most. Your eyes may pop out of your head as you watch a family of five zip by…all on one scooter. You may also gape at the sight of livestock on its way to market. The other thing you’ll notice is that the traffic never stops; it flows like a never-ending river. The other side of the street looks like a distant land and you shake in your shoes as you try and figure out how you’ll ever make it there safely.

You definitely won’t see a sign such as the one below! 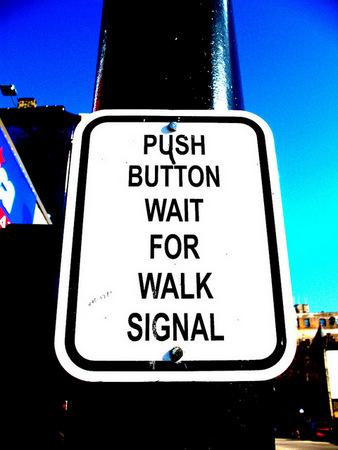 So how do you do it? When it looks and feels right, step off the curb with confidence (obviously, not in front of a bus or other large vehicle which can’t stop quickly).

Don’t panic and ignore the urge to run. Move slowly and steadily, keeping an eye on the traffic as you do so.

Try and move between gaps in the traffic and you’ll find that the traffic will flow around you. Most of the traffic moves quite slowly and those on scooters have an unobstructed view. The last thing any of them want is to hit you!

Once you’ve begun your crossing, the most important thing is to not to run or stop abruptly because drivers are expecting you to keep moving at a steady pace, and they’ll be unable to adjust their direction if you suddenly speed up or stop in mid-stream.

Drinking in the Big Easy – More Cocktails from New Orleans
Next Post: Beautiful Beaches in Bali