WanderTours New Orleans Culinary Tour is a fabulous way to get to know the culture, history and–most importantly–the FOOD of New Orleans.

I’ve wanted to go to New Orleans for 30 years, ever since my husband went there on business and I had to stay home with the kids. When Beth decided to add it to the repertoire of tours for 2014, I knew my chance had finally arrived. Never having traveled in the South before, I wasn’t entirely sure what to expect, but I did have certain expectations of what I would find. Did the Culinary tour and the city itself meet my expectations? That’s a resounding YES!

This was, after all, a culinary tour and I went with the expectation that the food would be wonderful. Which it was!

I am not an olive fan (in fact, I’ve been known to swallow them whole, rather than chew them), but I have to say that I ate a muffuletta and loved it! The barbequed shrimp were out of this world – every time I tried them – as were the gumbo and jambalaya. I learned about the ‘Holy Trinity’ (that’s onions, bell pepper and celery), the basis of N’Awlins cooking, and came home with a new cookbook to add to my already burgeoning collection.

I didn’t try the gator bites…but I did try the turtle soup!

The women in our tour group were from all walks of life and covered a wide age spectrum…but we all got along amazingly well. The days passed far too quickly and I think I’m going to have to go back to NOLA.

My one big surprise—and I don’t know why I was surprised—is the juxtaposition of the French Quarter against the built-up modernity of the downtown core. I think I was expecting the whole city to be old. I obviously read far too much historical fiction! 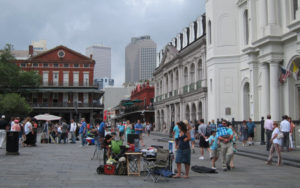 Five Must-Have Gadgets for a Traveler
Next Post: Interesting Facts About Bali