Interesting Facts About Buddhism in Vietnam

Buddhism abounds throughout the country of Vietnam, from architectural styles to temples and it’s intertwined with local history.

Vietnam is unique among Southeast Asian countries. Where most of Southeast Asia practices Theravada Buddhism, Vietnam took some influence from nearby China and adopted Mahayana Buddhism instead.  What’s the difference between the two versions? Theravada focuses on personal meditation and takes a very monastic approach to enlightenment, while Mahayana promises spiritual liberation to both monks and ordinary folk. It’s all a bit confusing unless you’re a Buddhist…but believe me, there are definite differences between the variations.

Buddhism arrived in Vietnam via India during the second century and soon became the spiritual base for the nation. Today, although fewer than 10% of the population actively practice Buddhism, it continues to permeate the history and culture of Vietnam. One example of this is the pagoda-style architecture—where the up-tilted corners of each temple reach to the sky. These symbolize the human desire to bridge the gap between the constraints of being bound to life on earth and the perfection of heaven. 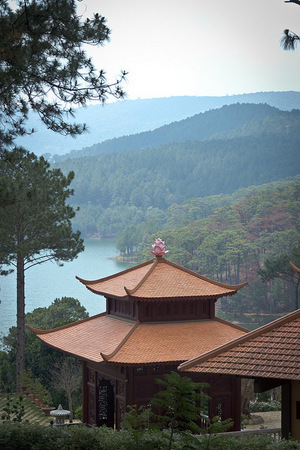 We’ll see plenty of temples and pagodas on our annual Women-Only Tour of Vietnam, but one of the most iconic ones we visit is the One-Pillar Pagoda in Hanoi. Built in 1049 by the emperor of the time, it commemorates his gratitude for the birth of his infant son. He dreamed he was handed a baby boy by a bodhisattva (an enlightened being) while sitting on a lotus flower. He married a peasant-girl and together they had a son. A monk told him to build a pagoda in the middle of a lotus pond to celebrate the son he had wanted for so long. 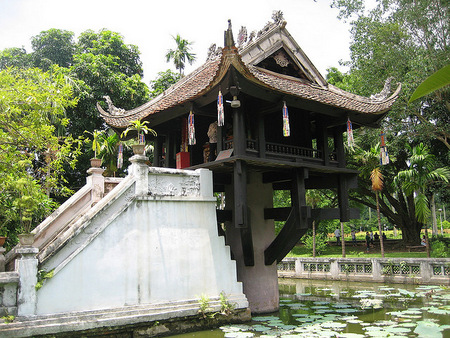 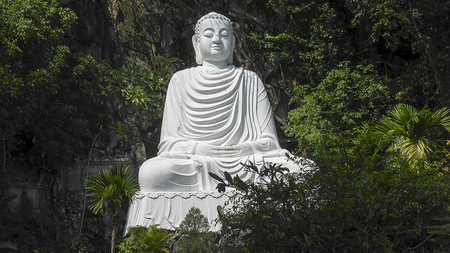 I didn’t know much about the history of Vietnam until my son signed up for a spring-break high-school trip there. In an information session before the trip, we learned about how Buddhism has had its ups and downs in popularity in Vietnam over the centuries. In the 1800s, the French along with its Catholic missionaries invaded Vietnam and made it part of French Indochina.

The Japanese invasion and subsequent defeat at the end of World War II ended the French rule, leaving not only plenty of French influences such as mouth-watering baguettes and a French-speaking population, but a politically divided Vietnam. The north half of the country was ruled by the Communist Party, while the south was basically a republic. This is when the U.S. became concerned about the political situation and decided to intervene. Since the fall of Saigon in 1975, the entire country has been ruled by the communists.

Between 1955 and 1963, the president of South Vietnam, a Catholic, was determined that the country follow Catholic principles. Buddhists were forbidden to fly the Buddhist flag during Vesak, the most sacred holiday. This resulted in protests, hunger strikes and most famously a Buddhist monk named Thich Quang Duc setting himself on fire while seated in a meditation position in the middle of a Saigon intersection. In the end, over 1400 monks were arrested and many disappeared forever, assumed killed.

Interesting Fact: Buddhist monks’ saffron robes are called this because they were originally dyed using spices such as turmeric or saffron. 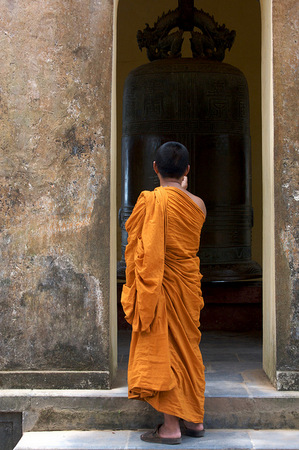 Today, Vietnam is ruled by the Communist Party and there are two factions of Buddhism. There is the government-sanctioned Buddhist Church of Vietnam (BCV) and the non-sanctioned independent Unified Buddhist Church of Vietnam (UBCV). As the UBCV refuses to join the BCV, it has been banned and its monks and nuns are often harassed and detained by government forces. Their treatment is a genuine concern for human-rights organizations.

Interested in learning more about Vietnamese Buddhism? Join us on our women-only tour of Vietnam. Contact us or phone us at 1-206-317-1860.