Because the nation of Indonesia includes 6,000 inhabited islands and 300+ different ethnic groups, you’ll find a blending of cultural influences and 5,000+ traditional recipes.

Yum! The food in Indonesia is colorful, tends to have a bit of heat and offers variety enough to please everyone. Because the nation includes 6,000 inhabited islands and 300+ different ethnic groups, you’ll find a blending of cultural influences and 5,000+ traditional recipes. 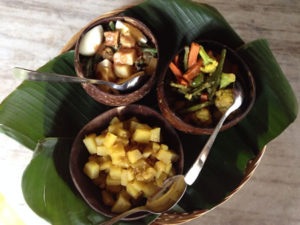 Because of the nation’s location and rich trade history, there have been many outside influences on its cuisine. You’ll see similarities to dishes from the Middle East, China, India, Spain Portugal as well as the Netherlands. The Maluku Islands – an archipelago within Indonesia – are known as the “Spice Islands.” Spices such as cloves, nutmeg and mace are grown here and were used in Indonesian dishes before being introduced into global cuisines.

Sumatra is the largest island in Indonesia and the food here often has a Middle Eastern or Indian influence. You’ll find lots of curries which incorporate lemongrass, ginger, garlic, sambal and coriander. Sambal is an Indonesian chili paste which adds heat to many dishes. I use it in many Asian recipes as most chili sauces tend to be interchangeable. But be careful! It can blow the top of your head off if you add too much.

The indigenous Javanese people inhabit Central and East Java as well as Yogykarta. Their cuisine is less spicy, more indigenous and simpler than Sumatran cuisine. There is sometimes a Chinese influence to their dishes. Dishes are also sweeter than those from other areas due to the use of palm sugar and ketjap manis (sweet soy sauce).

Here are a few yummy Indonesian dishes to watch out for on your travels. 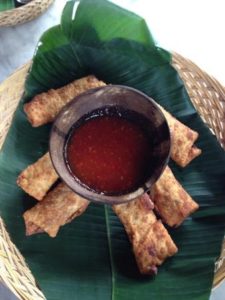 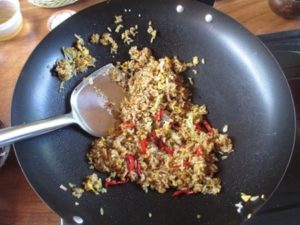 Staples of Indonesia Cuisine include:

Our tour participants on next year’s sold out Bali tour have plenty to look forward to when it comes to trying new food!