A Q&A with Leslie Nevison of Mama Tembo Tours

Earlier this year, we ran our first Tanzania tour(s). This included a trek up Mt. Kilimanjaro and safari with one group and a second group that only went on safari. As we do with all international trips, we partnered with a local tour operator. We rely heavily on these contacts to make our trips go as smoothly as possible. In Tanzania, our ground operator was Leslie Nevison of Mama Tembo Tours.

We thought it would be fun to share a little of her story with you! 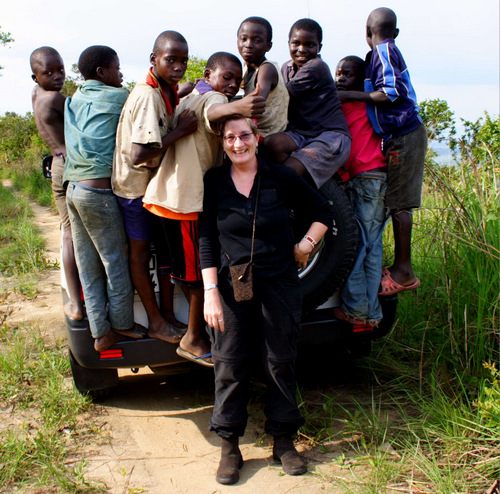 Q. You’re originally from Vancouver, Canada. Can you tell us about what first took you to Africa and how/why you’ve chosen to make it your permanent home?
A. I am not from Vancouver originally. I was born in Eastern Canada but grew up in Dublin, Ireland where I finished secondary school. In 1975, I went to Vancouver to attend the University of BC where I met my husband who was both an American and Canadian. I am now a dual citizen as well. My husband has worked overseas construction (builds American Embassies primarily) since 1989. Our first trip to Africa was in 1992 when we lived in the Middle East. We went on safari in Kenya. When the opportunity came to live in Tanzania in 1999, (after al Qaeda bombed the Dar es Salaam and Kenya US Embassies in 1998), we jumped at it based on the memories of that first safari.

Prior to Tanzania, we had lived in Turkey, Sultanate of Oman, and Singapore (twice) and our own personal travels had always focused on Asia. I think I recognized immediately that I had found a home in Africa, primarily because of my love for wildlife. But I was affected too by African culture – the sense of community and hospitality; the respect for elders; the respect for education; the love of music and dance; and the courage shown in the face of daily challenges.

I enjoy being challenged as well. The actual decision to make Zambia a permanent home wasn’t made until 2011, after living in several African countries. By then, I knew I didn’t want to live any place else. Returning to Canada and the United States became the alternate reality and culture shock happened in reverse.

Q. What made you decide to start a tour company in Africa?
A. It was always my intent to return to work full time. (I had worked several years in mental health after leaving university.) All through the years that I played the supporting role in my husband’s overseas career, I had always found something to do – volunteering at hospitals; selling antiques and fine art; tour guiding; and writing. Of course, I traveled all the time too. In 2004, politics took a turn for the worse in Uzbekistan where my husband was working. Although he stayed to finish the Tashkent embassy, family members were not permitted. I returned to Vancouver with two dogs which had been born in Tanzania.

Evacuating and leaving my husband behind wasn’t easy and I decided that the time was right to get back to my work. I was already advising people on how to go on safari in Tanzania. I understood that Africa was not like Southeast Asia where you could get around with a Lonely Planet guidebook. Africa hadn’t experienced its tremendous growth yet. Travel was complicated and poorly informed decisions were costly. I asked myself what it was that I loved to do, reviewed what I considered my skills, and made it official. I incorporated Mama Tembo Tours in British Columbia in 2005. 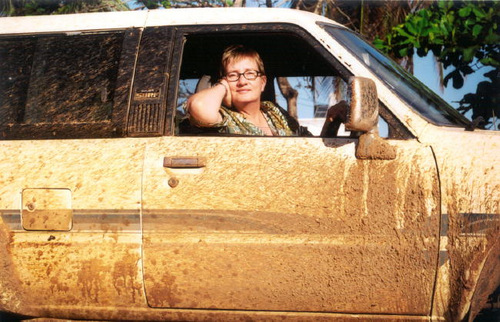 Q. How did you choose the name of your company—Mama Tembo Tours?
A. The story of how I chose the company name began in Dar es Salaam, Tanzania. I was still writing for magazines but I dreamed of writing a travel narrative. I traveled in an old Toyota to the four corners of Tanzania in search of material.

Over time, staff, family and neighbors called the old vehicle Mama Tembo, which in Kiswahili, means Mother Elephant. In Tanzania, bus and truck drivers often bear the names of their dilapidated vehicles. This is what happened to Mama Tembo, the Toyota and her driver. They merged. (Editor’s Note: This is also the story behind the company logo. That’s Leslie waving out the Toyota window!) It was therefore an easy decision to name the business Mama Tembo.

I liked it that people would instantly recognize that the company owner was a woman. As for the book titled The Mama Tembo Tour, of course it did get written, but to this day sits as a manuscript in need of editing and an updated perspective. I will get around to re-working it. I have come to realize its enormous value. The Tanzania I experienced behind Mama Tembo’s wheel no longer exists.

Q. How does your tour company differ from other tour operators in Africa?
A. MTT is a small company, the advantage of which is quick decision-making ability, room for lots of flexibility and highly personalized service. I too dislike dealing with safari companies which have grown so large that six people get copied on an email, or that you must work with a company headquarters outside of the country in which you want services. MTT is very hands-on from beginning to end. I have broad experience and knowledge of more than one African country having lived in many of the destinations I offer, or have traveled widely to neighboring countries, so this makes me a qualified consultant for anyone seeking multiple-country safaris. 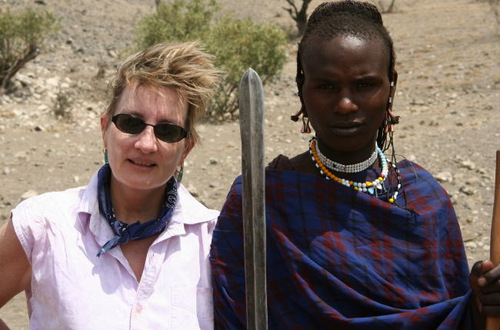 Q. During your years in Africa you have lived in a number of countries. Do you have a favorite? If so, what makes it so special?
A. I have lived in Tanzania; Republic of Congo (also known as Congo-Brazzaville); Zambia; Gabon; Benin; and Zimbabwe, in that order since 1999. Each of these countries is unique so I do not have a favorite. Tanzania is where my love affair with Africa began. I love Tanzanians’ innate sense of hospitality. Southern Africa has the erroneous perception that their safaris are less commercialized than East Africa’s – it’s true, they do not have the visitor numbers or numbers of budget travelers – but I can tell you exactly how to get off the beaten path anywhere in Tanzania, and the Rift Valley scenery is magnificent.

Uganda and Rwanda have Mountain gorillas and chimpanzees. I chose to live in Zambia because I love the Zambian climate, outdoor living life style, bird life and trees. Lusaka still has some lovely old trees, although this is changing. Zambia’s South Luangwa National Park is easily one of my all times favorites and I want everyone to see it along with the Serengeti. Zambians are warm and friendly. Zimbabwe has amazing wildlife, national parks and people who are easily among the continent’s most artistic. Central Africa has true jungle, the Congo River, and lowland gorillas.

I remember when I first looked into a gorilla’s eyes and understood why people become so enamored with them. West Africa is less about wildlife – as the majority of it has vanished – and all about culture – fabrics, clothing, music, art, and beliefs. I have been lucky enough to attend the all-night rite of passage ritual called Bwiti of a Gabonese friend and Benin’s voodoo festival, one of the most fascinating cultural festivals I have seen on the planet. Africa is a diverse continent, which first-time visitors understand only after they complete what they think is their only trip to Africa. They return home and start saving to return. 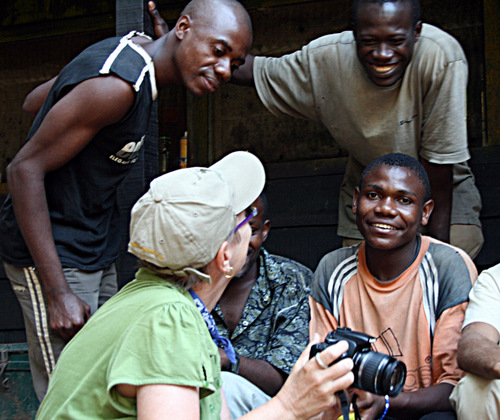 Q. Do you find it difficult to run a business in Africa?
A. Any small business owner knows that they are the face of their business. They have to be visible and accessible. This is as true in Africa as it is in the US, but in Africa, it’s vital to be even more hands-on. Recently, someone told me of their plans to open a business in an African city but manage it from outside the country. In my experience, this doesn’t work. In Africa, your employees become part of the family of which you are the matriarch. (In my case, Mama Tembo is an apt moniker.) You are the teacher, problem resolver, quality control and fiscal manager, and you cannot step away too long.

Q. Can you give an example of how running a business in Africa is different than running one in North America?
A. I started the business in Canada, but incorporated a branch in Zambia in 2011. Beginning in 2014, I started to work out of Zambia entirely for the very good reason that I was spending more and more time in Africa and less in Canada. It is just as easy working with clients in Africa. I felt cut off from Africa when I wasn’t there. I am in the information business. I have to stay on top of changes and current conditions and the only way I can do that is to live here. An annual trip to the continent for North American based agents to check out new camps or attend trade shows and week-long FAM (familiarization) trips may be all the time and funding they have, but it isn’t sufficient. It isn’t just about keeping up with the lodges and camps. It’s knowing all the resources here. 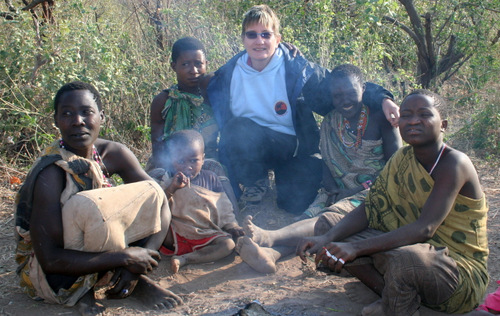 Q. What are some of the issues you have as a foreign woman running a business in Africa?
A. For the most part, as a female business owner I am treated with respect by my African hosts. What lack of support I may experience comes more often from fellow foreign operators. I take the view that marketing a destination takes all operators working as a team, but homo sapiens are naturally territorial as well as tribal, and so it usually doesn’t work out that way. You must always consider the role your own ego plays in the situation too. You need to be confident and persevere. 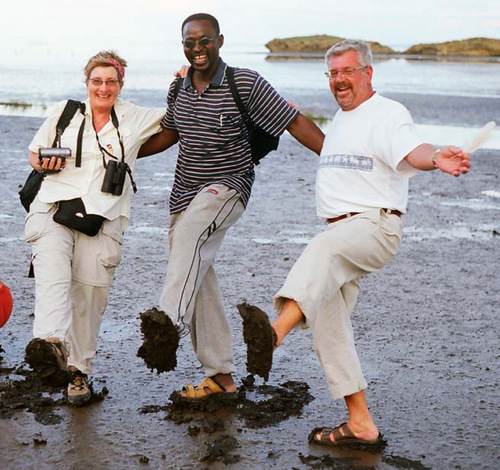 Q. How would you describe life in Africa to someone who has never visited the continent?
A. I spent six years in Singapore which was clean, safe and boring. Artifice was the preferred reality. We lived in a comfortable apartment in a modern, multi-storied complex, but I lived like an ant in a large concrete anthill on an island of concrete anthills. At night, I could literally hear Singapore hum.

On flights to Harare from Europe I have met Zimbabweans giving up jobs in London to return to uncertainty because they can’t bear to be away any longer. They miss everything about Africa, as do I now when I am away.

What do we miss? This is tough to explain to anyone who has not traveled here. Yes, Africa has crowded, messy cities; poverty, violence; shortages of electricity and water; poor health care. But Africa has wilderness; wildlife; space; breathtaking natural beauty; beautiful people; laughter. I accept what Africa doesn’t have for what it does.

Q. What would you like first time visitors to Africa to know?
A. With some exceptions, Africa is safe, its clean; its hospitable. You are going to have a life-altering experience which will change you for the better.

Previous Post: « Leaving Your Pets at Home While on Vacation
Next Post: Top New Orleans Restaurants for Indulging